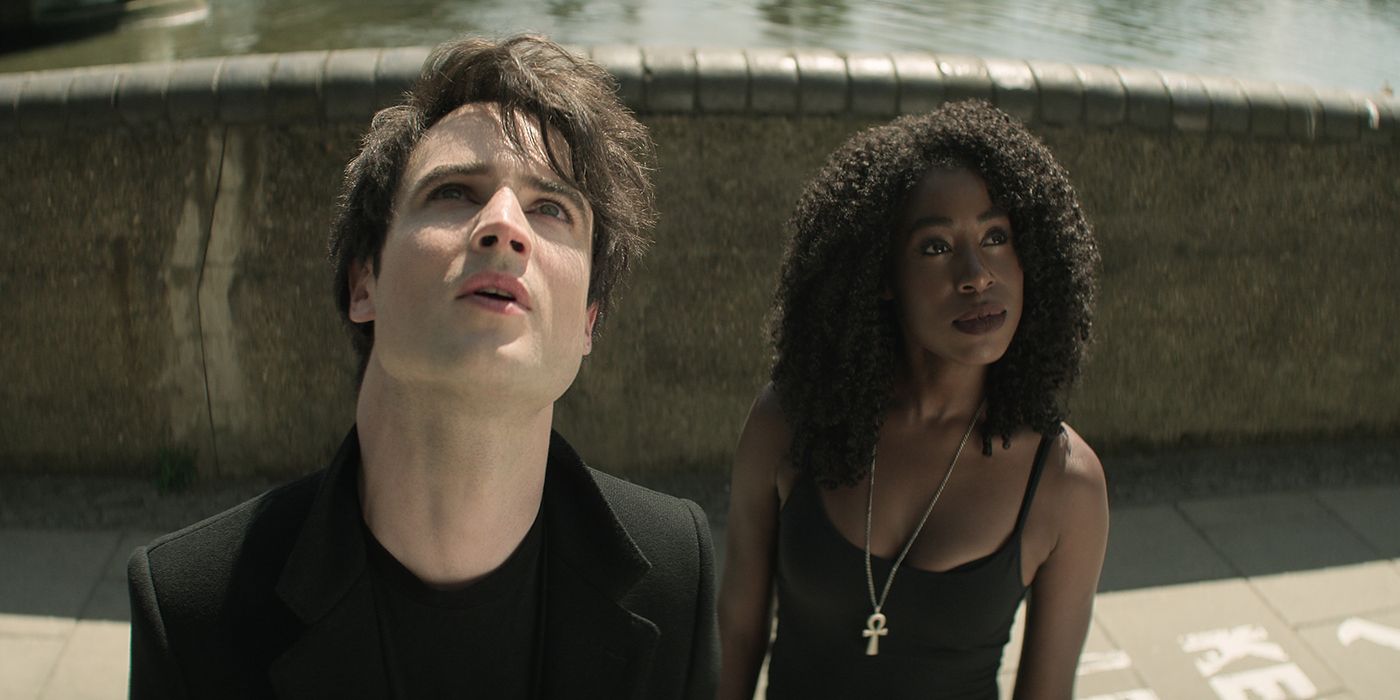 At the beginning of The Sandman, the protagonist Dream (Tom Sturridge) is stripped of all his power and possessions, and made a prisoner for nearly a hundred years. As the show progresses, we see the Dream strive to no only rebuild his existence, but redefine it and challenge himself in ways this eternal being had never done before. The individuals Dream encounters in his journey of growth are drawn to him because of their experiences in The Dreaming while they sleep. Viewers learn there’s another way humans perceive dreams from these experiences. Each of these characters are filled with hopes and dreams that motivate them in the waking world, and these stories show the many ways hope can sustain us through the darkest times.

A Mother’s Hope For Her Son

We learn about a mother’s hope for their children through Ethel Cripps (Joely Richardson). When Ethel finds out she’s pregnant, Roderick Burgess (Charles Dance) tells her to get rid of it and immediately contacts the doctor about the appointment. It’s obvious, though, that as soon as Ethel found out she was pregnant she began dreaming about her hopes for her child’s life. To suggest getting rid of it was enough to convince Ethel there was no other choice but to rob Roderick of everything and run away somewhere he would never find them. She gave up everything in order to give her son, John Dee (David Thewlis), the life she hopes he’ll have. She went as far as to make a deal with a demon for an amulet of protection to make certain Roderick could ever find them. Viewers see how strongly Ethel’s hopes motivate her when she visits John in prison. She had been lying to John about who he was, so to convince him that she truly hopes to protect him, she shares everything about how she secured their safety then surrenders the amulet of protection to him. A mother will sometimes sacrifice everything if it means helping their child build the life they hope to achieve.

Hoping to Prevent Harm to Others

Johanna Constantine (Jenna Coleman), with her pessimistic view of the world, is strongly motivated by the hope that she can make the world safer for everyone. She expresses clearly that she fights demons for a pay day, but it’s obvious that she also does it to save people from getting hurt. Her fear of intimate relationships has to do with her desire to prevent harm, because she thinks someone’s chances of getting hurt only increase the closer they get. After they discover her ex Rachel (Eleanor Fanyinka) dying because of the magical item she left there, her mind immediately goes to doing whatever it takes to stop more harm from being done. She’s astonished when Dream suggests they leave Rachel without doing anything to help her pass away more comfortably, and starts thinking of what she can do to help if Dream leaves. Even when it was her mistake that caused her to become emaciated, Constantine’s only hope was that she could stop any more harm from being done. Her hope convinces Dream to do the right thing. Seeing Constantine act on her hope is a great lesson about putting our own ego aside to prevent more harm coming to anyone else.

RELATED: Why ‘The Sandman’s Matthew the Raven Is Such an Important Character

The most glaring example of the importance of hope is Lucifer’s battle with Dream for his helm. This isn’t a fist fight, or a clash or weaponry. The battle is in their minds, taking turns describing what would be guaranteed to defeat the last thing their opponent described. The battle culminates in Lucifer describing Anti-Life, killing the universe Dream invoked. It seems the Dream Lord is defeated, until Matthew the Raven (Patton Oswalt) reminds him, “Dreams don’t die.” This reminds Dream, even when all seems lost and an evil unstoppable force seems to be killing all life in the universe, there is still hope that things can get better.

Lucifer concedes and has Dream’s helm returned, but only because they hope that all the demons there can trap the dream lord in hell forever. Dream then reveals the significant role that people’s hopes and dreams play in their torment in hell as Dream asks, “Tell me Lucifer Morningstar, what power would Hell have if those here imprisoned were not able to dream of Heaven?” The look on Lucifer’s face shows how much they hate dreaming of getting into Heaven, and Dream’s well aware of this, forcing Lucifer to let Dream freely leave this realm.

Hopes and Dreams Sustain Us Even in Mundane Moments

One of the greatest lessons viewers learn is how important hope is for motivating people to achieve their goals. When Dream confronts John Dee in the diner, John hopes that he will be able to “save the world from its lies” by forcing everyone to abandon their inhibitions and speak the truth. John has a skewed perception of what “truth” is, though, believing that people should never tell any lie, no matter how small. Dream finds John after he uses Dream’s magic ruby to make his truth a reality, causing widespread devastation. Dream teaches him why his version of the truth isn’t the complete truth of humanity at all. People’s hopes and dreams for the future show a clearer, deeper vision of each person’s truth than the superficial interactions we engage in while perusing our dreams. As he replays conversations of those in the restaurant that day, he reveals what they are truly hoping for and how those dreams inspire them to live through these mundane moments.

John’s distorted view of the truth made him blind to their hopes and dreams, making him feel like all the kindness and superficiality of humans was one big lie that needed to stop. When he stopped the lies, though, everyone learned the truth of mankind is indeed as barbaric and selfish and dark as John suggests, and it rapidly destroyed all their hope. In the beginning of the episode, Bette (Emma Duncan) calls John handsome, and he uses the ruby to make her admit this is a lie. When you look at the truth from Dream’s perspective, Bette didn’t lie because she is doing her job as a server and hoping that kindness will cause her patron to feel welcome and cared for. Bette’s deepest hope motivating her is to “create something that matters to people”, but society requires certain obligations of people in order to achieve our dreams, such as taking a waitress job where her income is directly tied to the impression her patrons have of her. The superficial behaviors we engage in barely scratch the surface of our true selves. It’s our hopes and dreams that reveal the truth of our being and what really motivates us.

There’s Always Hope That Life Can Get Better

The most optimistic lesson about hope in The Sandman is in the story of Hob Gadling (Ferdinand Kingsley). Dream and his sister Death (Kirby Howell-Baptiste) overhear Hob in a tavern in 1389 proclaiming that Death is stupid, and he has no intention of ever dying. Dream thinks he would be wishing for the end before 100 years passes, and Death offers to grant his wish to see if Dream’s claim is true. They meet up every century to see how he’s doing, and after two centuries, Hob seems to have lived many successful lives being unable to die. At their third meeting in 1689 Hob exclaims that he “has hated every second of the last 80 years” after losing his wife, son, and wealth. Most viewers assumed that anyone who’s sunk this low would give in to death, but when Dream asks if Hob is ready to die, Hob responds “Are you crazy? Death is a mugs game, I’ve got so much to live for.” Even after 80 years of tragedy, Hob Gadling knows there is always hope as long as you’re still alive. Hob also teaches viewers a great lesson in having empathy for the hopes and dreams of others.

In their fourth meeting, Hob reveals that he found fortune getting involved in the slave trade. For the first time, Dream sternly advises Hob to find another line of work. When Hob pushes back reminding Dream of his promise that he would always have the choice to live his life however he wanted, Dream reminds Hob, “The choice is yours. But would you take that choice away from others?” This question obviously hits home, and he implies he will find new work. Everyone has hopes and dreams, and we should all have the freedom to pursue them so long as no one else is harmed in they process. It’s a lesson about kindness and empathy that humanity could stand to learn more often.

Hope Isn’t Exclusive to Humans in The Waking World

Many of those who inhabit the land of The Dreaming also share great lessons about hope. Lucienne (Vivienne Acheampong) is mistreated by Dream and second guesses their purpose in the dreaming, but because they feel such fierce loyalty to the Dream Lord, they put all their energy into talking through Dream’s plans with him before he impulsively rushes head first into taking action. Matthew, Dream’s new raven companion, is turned away many times as a servant, but because he knows how many ways he can help and hopes to prove himself to the Dream Lord, it isn’t long before the Dream is convinced. Abel (Asim Chaudhry), after pulling himself up out of another shallow grave, tells a story to Irving (Goldie) about his hope for sharing a happy life with his brother Cain (Sanjeev Bhaskar) who would be compassionate and caring with him. The Corinthian (Boyd Holbrook), bad as he may be, has hopes to do more that just give people nightmares by staying in the waking world and breaking free from the dream lords kingdom. Whether they achieve their dream or not is irrelevant, though, because each of these characters is a prime example of how the dreams that drive our actions are a bigger part of who we are than the momentary things we say or do while hoping those dreams come true.

How Dream Himself Teaches Us The Value of Hope and Change

The prime example of the power of hope in this show comes through in our protagonist. Throughout all of his experiences, we see that his choices are driven by the hope that he can become better than he was before. He’s not seeking to be more powerful, necessarily. He just hopes to become a better version of himself with each passing experience. Dream explains to Death how fulfilling it had been to have a quest as he sought to reclaim his pouch, helm and ruby, and then how empty he felt when it was all over. It’s this feeling of purpose and meaning that the Dream Lord is hoping for, and his behavior is greatly motivated by this desire to learn more and do better. In the end, we see him reverse a decision that seemed set in stone when he brings back Gault (Ann Ogbomo). Not only does he bring her back from the darkness, he took into consideration her desire for change and made her into a dream instead of a nightmare. After she flies off into the land of the Dreaming, we see that the Dream Lord is working on four new entities that will become dreams and nightmares. He’s realized that he made mistakes after coming back from his imprisonment, and he’s hoping to make up for those mistakes by making changes to the realm of dreams will be for the betterment of all. The greatest lesson about hope that viewers should take away from The Sandman is that we should take action each new day in the hopes that we will become better people, just like the Dream Lord himself.