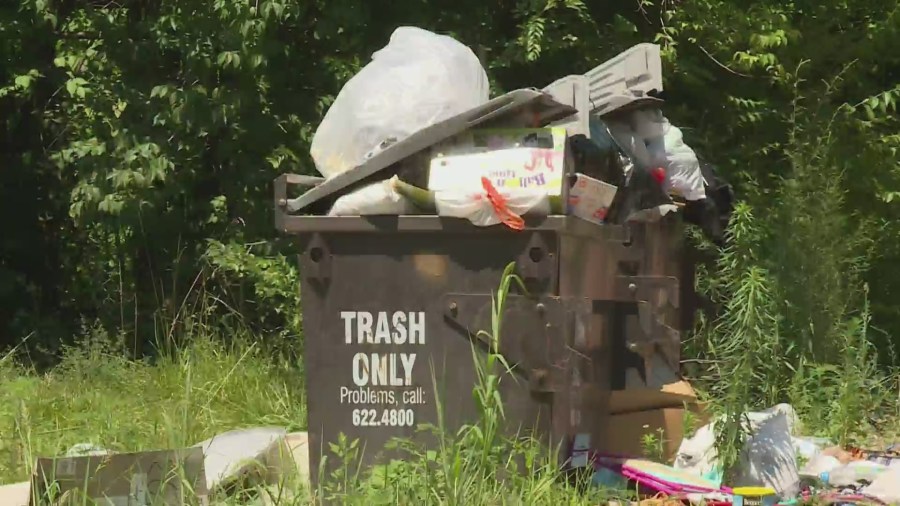 ST. LOUIS – A group of St. Louis aldermen seem to be saying “enough already” when it comes to the city’s ongoing crisis with trash pickup.

They want Mayor Tishaura Jones to hire outside help. They’re even looking into refunding a portion of residents’ trash fees because of poor service.

Oldenburg is one of many who calls for the city to contract for additional garbage service.

In a Facebook post, Alderman Bret Narayan (24th Ward) of the Dogtown neighborhood in south St. Louis, urges people to share their frustrations with the mayor.

“The solution is for the mayor’s office to contract with a private trash service until the refuse department is properly staffed and caught up.”

A spokesperson for the mayor said it’s not as simple as hiring an outside company to haul away trash. It has to do with the hooks on the dumpsters in neighborhood alleys, where most residents throw away their trash. The city garbage trucks use latch onto the hooks to lift and dump the trash. Only City of St. Louis trucks and dumpsters have that type of hook system. So, trucks from outside companies just would not be able to work.

The spokesperson said pay raises, hiring bonuses, and a new recruitment campaign are already helping the city’s understaffed Refuse Division catch up. With an average of 35 of the city’s 48 garbage routes, or 73% getting scheduled service last week. That’s up from a low of 27.

Some aldermen said that’s not good enough. The overfilled dumpsters continue to not be empty, for days.

“To push back and say there’s just a labor shortage and deal with the frustration, that’s not a good answer on what is the most basic city service we should be providing,” Oldenburg said.

Oldenburg said picking up “bulk” garbage items like old mattresses and furniture from city alleys do not require specialized trucks. If the city have outsourced that service would free up more drivers to get to more dumpsters.

Oldenburg said with the federal pandemic relief money the city has, it can afford to pay for help. However, the city cannot afford to simply keep letting garbage pile up.

He said he expected aldermen to propose new legislation in the coming days to contract for outside garbage companies and to refund a portion of the $14 monthly garbage fee that residents pay.

“Rebates might need to be issued to folks who have paid for a service they are clear not getting,” Oldenburg said.

The city has collected about $24 million in monthly service fees from residents since January 2021. The St. Louis Refuse Division has failed to fulfill its end of the bargain for much longer than that.