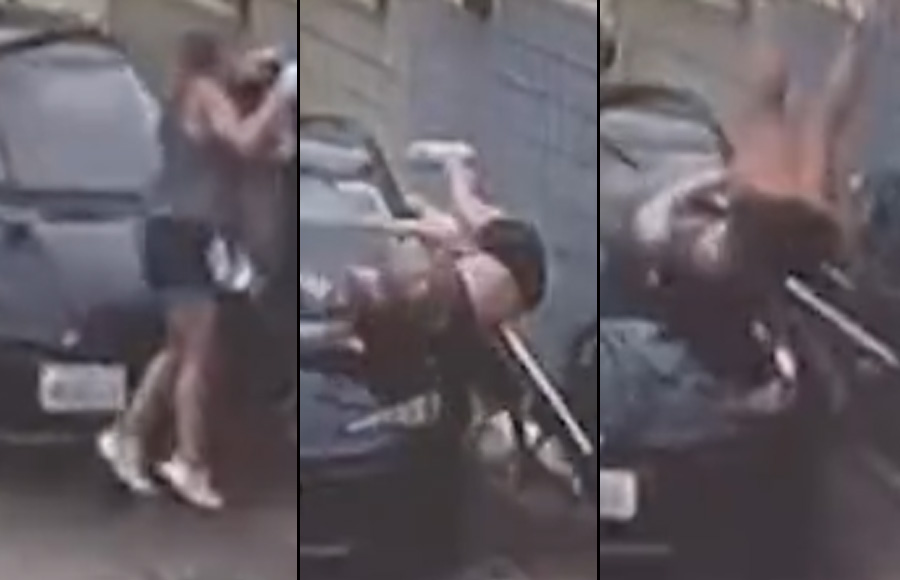 LOS ANGELES, CA – A teenaged convicted felon in Los Angeles who ran over a mother and baby – while reportedly on probation, high on drugs and driving a stolen car down a one-way street – will appear in court Thursday to ask for an early release from his already shockingly-light six month sentence, leading the victim to join the chorus of voices condemning ultra-progressive LA County District Attorney George Gascon’s “light on crime” policies.

The sickening incident – caught on surveillance video – shows the victim, asking only to be identified as “Rachel,” walking her 8 month-old child in a stroller in Los Angeles last year. The teen is then seen speeding down the one-way street, sending the mother and child flying in the air as he callously runs into them. After pausing briefly as the mother scrambles to her feet and runs to check on her child, the teen then speeds off again, only to be stopped by a passing witness who rammed his pickup truck head-on into the escaping vehicle.

The 17 year-old teen, described as a while male with a neck tattoo, was said to be under the influence at the time, and that marijuana was found in the car; he also did not possess a driver’s license, and he was in violation of probation related to a previous Felony poisoning conviction, where he spiked the drink of a high school girl who was hospitalized as a result.

FREE DIGITAL SUBSCRIPTION: GET ONLY ‘FEATURED’ STORIES BY EMAIL

Big Tech is using a content filtering system for online censorship. Watch our short video about NewsGuard to learn how they control the narrative for the Lamestream Media and help keep you in the dark. NewsGuard works with Big-Tech to make it harder for you to find certain content they feel is ‘missing context’ or stories their editors deem “not in your best interest” – regardless of whether they are true and/or factually accurate. They also work with payment processors and ad-networks to cut off revenue streams to publications they rate poorly by their same bias standards. This should be criminal in America. You can bypass this third-world nonsense by signing up for featured stories by email and get the good stuff delivered right to your inbox.

Amazingly, Rachel and her child both escaped with only minor injuries, despite the fact that the infant reportedly had a tire-tread-shaped bruise on the back of his scalp.

DA Gascon’s office caused controversy in June when – despite the teen pleading guilty two counts of assault and one for attempting to flee, all felonies – gave him a sentence of only five to seven months in a juvenile probation camp. In addition, Gascon’s office never charged the youth with driving under the influence, but nonetheless called the light sentencing the “appropriate resolution.”

Gascon has a history of pushing extremely progressive policies and a “soft on crime” approach to law enforcement, and as a result crime in Los Angeles has skyrocketed under his watch.

Reacting to the punishment that the teen – who she accused of actually  attempting to murder her and her son – and the fact that her assaulter was attempting circumvent an already barely-there sentence for his crime, Rachel expressed extreme disgust with Gascon’s office, who she said never even informed her of Thursday’s hearing.

“I remain incredibly disappointed with the justice system in LA, but I am unsurprised to learn that I am yet again being denied my rights as a victim to participate and use my voice in the judicial process,” she said. “F**k George Gascon.”