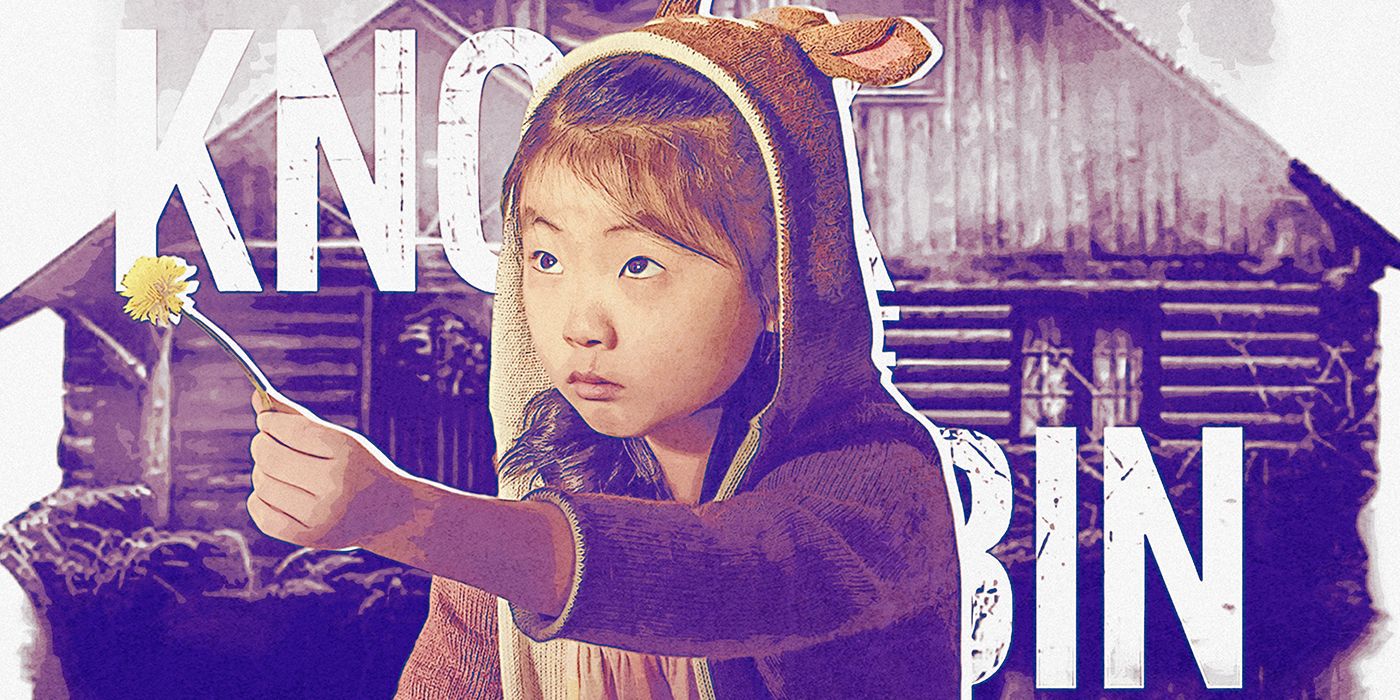 Originally teased last October in a tweet from M. Night Shyamalan showcasing the film’s title paired with ominous knocking sounds, Knock at the Cabin is nearly here. The movie is the second out of a two-film partnership between Universal Pictures and Shyamalan’s production company, Blinding Edge Pictures. The first film from this pairing was Old, released in 2021.

Knock at the Cabin is actually based on a 2018 novel written by horror author Paul G. Tremblay called The Cabin at the End of the World, which earned Tremblay his second Bram Stoker Award. Tremblay has several other horror novels, such as A Head Full of Ghosts, but this will be the first film adaptation of any of his stories.

After his first film, The Sixth Sense became a sensational hit in 1999, M. Night Shyamalan struggled to satisfy some of his fans with subsequent releases. His style of storytelling became known for the trademark commonly referred to as a “Shyamalan Twist,” which has been referenced countless times within pop culture. In 2015, his career started to stabilize and he regained the trust of his fanbase back with the success of The Visit.

Since then, Shyamalan has continued to impress with Split and Glass as sequels to his 2000 superhero origin story film, Unbreakable. Before going on to make Old, he teamed up with Apple TV+ to create a suspense-thriller television show called Servant, which currently has three seasons and awaits a January premiere for the fourth and final installment.

Shyamalan has a tendency to be a one-man show, consistently writing, producing, and directing his own films. Knock at the Cabin proves to be no different, with Shyamalan adapting the screenplay from the original novel by Tremblay. This article will tell you everything you need to know about the latest addition to Shyamalan’s increasingly impressive portfolio.

What’s Knock at the Cabin About?

Knock at the Cabin follows a couple, Andrew and Eric, and their young adopted daughter as they are settling into a cabin in the woods for a relaxing getaway. Their recreational reclusiveness doesn’t last long, however, as they are soon approached by a man and three other strangers. He introduces himself as “Leonard” to the daughter as she is out collecting bugs by herself. She tells him that her name is Wen and asks why he’s there.

His response is that he’s supposed to make friends with her and her fathers, but that he’s “heartbroken” because of something he and his friends have to do. As he tells her this, three other people emerge from the surrounding woods, all carrying ominous types of weaponry. We see Wen hurriedly making her way back to the cabin and her fathers, as she grows uncomfortable with Leonard and his companions.

After he speaks with Andrew and Eric through the locked doors of the cabin, the four strangers force entry into the home. With both fathers subdued, Leonard explains to the family that he and his group have a “very important job to do,” that might be the most important job “in the history of the world.” In short, he tells the terrified family that they will have to make a choice, and if they don’t, it would bring about the apocalypse.

With four strangers breaking in and bringing this news, it’s difficult not to envision them as the biblical “Four Horsemen of the Apocalypse.” Will little Wen become the metaphorical lamb? Another interesting Shyamalan trait to keep in mind is that he has tendencies to embed religion into some of his stories, such as in Signs where the main character is a Catholic priest who struggles with his beliefs after the death of his wife.

The details about what kind of choice this will be are left unknown for now, but you can be sure that it will not be an easy decision. If you’re a person who enjoys and actively seeks out spoilers, you’re just going to have to read the book if you don’t want to wait to find out.

Yes! The trailer was just released on September 22. It creates a great juxtaposition between a seemingly cheerful getaway with the potential end of the world and gives us a good look at the characters.

Related:M. Night Shyamalan Starts Production on ‘Knock at the Cabin’

Who’s In The Cast of Knock at the Cabin?

As mentioned earlier, the cast list is very intimate for this film, with seven main players. Who are they, and what are their roles in the movie? Let’s break it down.

Leonard will be played by Dave Bautista. Because of his impressive stature and background in wrestling, he is often cast in a physically intimidating role, such as Drax the Destroyer in Guardians of the Galaxy. M. Night Shyamalan was so impressed by Bautista’s performance in the 2017 film, Blade Runner 2049, that he cites it as one of the major deciding factors to offer the lead role to the actor.

Eric and Andrew will be played by Ben Aldridge and Jonathan Groff, respectively. Aldridge is best known for his television shows, Fleabag, and Our Girl. Groff has a broader background with iconic performances on both screen and stage. He played the hilariously sassy King George in Lin Manuel Miranda’s hit broadway musical, Hamilton, as well as the cunning FBI agent Holden Ford in the drama series, Mindhunter.

Kristen Cui will be playing the adorable Wen, the adoptive daughter of Eric and Andrew. Cui is new to the game and this will be her first acting debut.

Rupert Grint and Nikki Amuka-Bird are both Shyamalan veterans, with Grint starring in Servant and Amuka-Bird playing a large role in Old. They will be playing the characters Redmund and Adriane, respectively, and are joined by Abby Quinn (Landline) as Sabrina. These three make up the troupe that joins Bautista’s Leonard in breaking into the cabin to hold the family hostage.

When Does Knock at the Cabin Come Out?

As the trailer states, the film will premiere on February 3, 2023. The movie was originally supposed to be released on February 17th, but the release date was pushed up by two weeks. Shyamalan stated that this was the fastest turnover for any script he has ever written, and that production and filming went by in a flash between April 19th and June 10th, of this year.

With the new release date of February 3rd, Knock at the Cabin currently has no box office competition. That is likely to change as we get closer to the date, but if it had kept the original February 17th release, it would have been stacked up against Disney’s upcoming Ant-Man and the Wasp: Quantumania.

February 3rd can’t come soon enough for some, but until then, you can have a Shyamalan marathon (or a “Shyamalarathon,” as some might say) and watch some of his previous films on a variety of streaming services. The Visit might be a good place to start if you want to see how Shyamalan can take a seemingly harmless situation and transform it into something very uncomfortable.