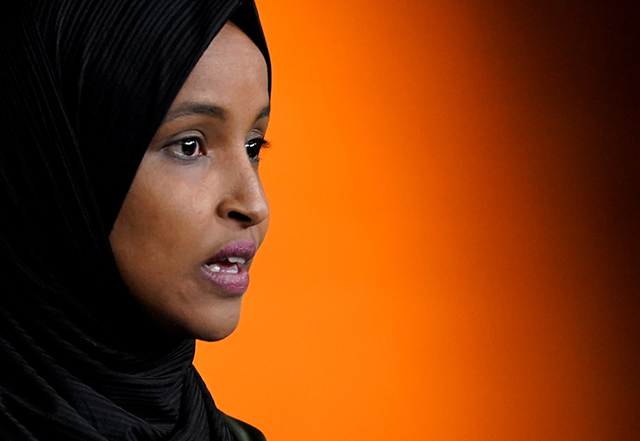 WASHINGTON — Rep. Ilhan Omar, D-5th District, broke with other members of the “Squad” this week to vote for a bill that would provide new funding for police departments – with certain restrictions.

Omar helped negotiate a compromise on the bill after U.S. House progressives and members of the Congressional Black Caucus withheld their support for the legislation because they said it lacked accountability.

Those negotiations helped win enough Democratic support for a package of policing bills to be able to clear a procedural hurdle on Thursday, especially a bill in the package called the Invest to Protect Act, which would provide small police departments with new federal grants.

Omar said that “through our constructive and productive deliberations with the bill’s author,” who is Rep. Josh Gottheimer, D-N.J., she helped secure “critical improvements” to the bill.

Those included targeting funding to small police departments, “as the spirit of the legislation intends,” Omar said in a statement.

Omar also said the compromise on the bill gives “the Department of Justice the ability to preference applicants that use the funds for officer training to improve community safety and accountability; and allow the funding to not only go to officer pay and training but also be used for data collection regarding police and community safety.”

Unlike Omar,  fellow Squad members voted “no” on the bill when it came up for a final vote. The spokeswoman for Rep. Cori Bush, D-Mo., said the legislation “would add nearly a quarter billion dollars in police funding over the next 5 years without addressing the crisis of police brutality — and this despite the strong and continued urging from civil rights and racial justice advocacy leaders to chart a more humane path.”

A major change in the “Invest to Protect” bill was that the new grants would be provided to police departments with 125 officers or less. The original bill allowed departments with up to 200 officers to apply for grants. Also, the money provided in the bill would not be used for new hires but could be used for signing bonuses as well as mental health efforts.

Every member of the Minnesota congressional delegation voted for the “Invest to Protect” bill, including Rep. Pete Stauber, R-8th District, who criticized the package as a political ploy by Democrats.

“Democrats are bringing out these bills today because we’re 46 days from a midterm election,” Stauber said on the House floor. “They want the American people to suddenly and miraculously believe that they care about the crime crisis plaguing our nation.”

The policing bills are not expected to reach President Biden’s desk before the midterm elections, but Democratic leaders believe they send an important message as Republicans attack them as being soft on crime.

Reps. Angie Craig, D-2nd District, and Dean Phillips, D-3rd District, had championed the policing bills and were dismayed they were pulled from consideration just before the House recessed in August.

“The first job of any government is ensuring public safety – and it’s my belief that the best way to do that is to make sure that our law enforcement officers have the resources they need to do their jobs safely and effectively. These bills are an important step toward doing just that,” Craig said.

In addition to the “Invest to Protect Act,” the package contains legislation that would provide new grants to train mental health responders and establish new violence intervention grants. Another bill would help clear the backlog of unsolved homicides and provide new support for victims of gun violence.

However, one proposal, sponsored by Phillips that would give the Justice Department $50 million for marketing campaigns to help recruit police officers nationwide was not included by Democratic leaders in the package.

A sweeping lawsuit against Trump

While it happened in New York, Washington lit up about New York Attorney General Letitia James’ announcement this week of a sweeping lawsuit against former President Donald Trump, three of his children – Donald Trump Jr., Eric Trump and Ivanka Trump — and the Trump Organization.

The lawsuit alleges the members of the Trump family were involved in an expansive fraud that the former president used to enrich himself. James is seeking a five-year ban on Trump buying commercial real estate in New York and a permanent ban on Trump and his three eldest children being in the leadership of any New York business.

The case also seeks to force Trump, his kids and business to surrender $250 million.

Trump called James, who is Black, a “racist” and the case a “witch hunt.”

Democrats delighted in the former president’s legal setback, but some say it has boosted Trump’s support among members of “base.”

“To Republicans, after Trump’s presidency and its aftermath, the bombshell was simply more of the same,” Politico said. “Just as they rallied around Trump when the FBI searched his estate at Mar-a-Lago, they saw little reason to conclude the New York lawsuit would do anything politically but help Trump with his base.”

In another legal defeat for Trump this week, a three-judge panel of the 11th U.S. Circuit Court of Appeals – two of whom were nominated by Trump – gave the Justice Department the go-ahead to continue looking at documents marked as classified that were seized from Trump’s Mar-a-Lago home.

Democrat Don Samuels who lost his primary challenge to Rep. Ilhan Omar, D-5th, by only about 2,500 votes, was given last-minute help by a super PAC affiliated with AIPAC, or the American Israel Public Affairs Committee, a politically powerful organization that lobbies for better U.S.-Israel relations.

The latest Federal Elections Commission reports show that the AIPAC-linked super PAC, called the United Democracy Project, donated $350,000 to a new group formed by Minnesotans who supported Samuels. The money was donated on Aug. 3, just six days before the Aug. 9 primary.

That newly formed group in support of Samuels, called Make a Difference MN-05, spent about $650,000 on television ads that ran right before the primary that highlighted the candidates’ different positions on policing. Omar supported a failed referendum that would have replaced the Minnesota police department with a new department of public safety and Samuels led the effort to defeat the voter initiative.

Because it contributed money to a separate group instead of spending on the race directly, the United Democracy Project was not obliged to report its effort to help Samuels until this week.

Omar drew AIPAC’s ire by suggesting in 2019 that Republican support for Israel is fueled by campaign donations.

Speaking of independent expenditures, the often massive – and supposedly uncoordinated – campaign spending by third parties is about to explode in the super-heated race between Democratic Rep. Angie Craig and GOP challenger Tyler Kistner in Minnesota’s 2nd District.

Television advertising buys for that race from Sept. 1 to November’s general election by the third-party groups already top $14 million, said Christopher Terry, an assistant professor with the Hubbard School of Journalism and Mass Communication at the University of Minnesota.

Some of the campaign commercials under contract in the ad buys are already running. But most of them will begin their roll out this weekend.

Every election year, Terry’s students monitor the “political files” at the Federal Communications Commission that detail political ad buys by candidates and other groups.

Here’s what the students found: The conservative Congressional Leadership Fund, a group aligned with House Minority Leader Kevin McCarthy, has reserved about $3.3 million in air time, expected to be used to run negative ads about Craig.

And the House Majority PAC, which boosts Democrats and is aligned with House Speaker Nancy Pelosi, has booked $2.5 million in ads that are already running to attack Kistner.

Then there’s the Alliance for Better Minnesota, a group that says it’s “focused on engaging with progressive activists and holding conservatives accountable,” which has spent about $720,000 to bolster Craig’s campaign.

And the Future Forward PAC, which helps Democrats, has spent about $3.6 million on behalf of Craig.

Terry said this onslaught of political advertising – mostly attack ads – by third parties are aimed at suppressing votes for the rival candidate.

“It’s not about getting you to vote for Tyler Kistner,” Terry said of many of the ads that will run relentlessly until Election Day. “It’s about convincing you not to support Angie Craig.”

House Republicans were given a sneak peek on Thursday at the “Commitment to America,”  the agenda the GOP plans to put forward if they win the U.S. House in November’s midterms.

GOP leaders hope their plan will give Republican congressional candidates a boost as November’s midterms near. The preview of that agenda, which will be officially rolled out in Monongahela, Pa., by House Minority Leader Kevin McCarthy on Friday, was scarce on details. But it clearly seeks to address the concerns of the party’s most conservative members.

On education, the preview of the Commitment to America calls to advance a “Parents’ Bill of Rights” and “defend fairness by ensuring that only women can compete in women’s sports.” The plan also supports hiring 200,000 more cops and moving supply chains from China as a way to fight inflation.

The GOP plan also vows to end proxy voting (instituted by Democrats during the pandemic) and promise to “hold Washington accountable” with oversight hearings that “require the White House to account for its incompetency at home and abroad.”

Unlike former Speaker Newt Gingrich’s 1994 “Contract with America,” the “Commitment to America” does not include a list of legislation that would be taken up by a GOP-controlled U.S. House in the first 100 days.

Emmer, who will attend the official rollout in Pennsylvania, told reporters on Thursday that does not matter.

“I don’t think Americans want legislative text, they want to know what you’re going to do and then they want you to get it done. Period,” Emmer said. “This is a guide a map to what we’ll do in the majority and I think our future speaker is handling it exactly the way it should be.”

He also said the agenda would help GOP candidates because, “you got to be for something, not just against something.”

Sen. Amy Klobuchar had a win this week when the Senate Judiciary Committee approved her Journalism Competition Preservation Act Thursday on a bipartisan vote.

What this means is that the bill would require Google, Meta, Apple, Amazon and Microsoft to increase compensation for journalists’ content.

Klobuchar’s bill would provide a “limited safe harbor” from federal and state antitrust laws to allow small news organizations to band together to negotiate better treatment from Google and the other platforms. But previous attempts to provide antitrust exemptions for individual industries, including journalism, have failed.

Klobuchar introduced the bill because of concerns over the loss of local and independent media organizations.

“As the daughter of a newspaperman, I understand firsthand the vital role that a free press plays in strengthening our democracy,” Klobuchar said in a statement. “But local news is facing an existential crisis, with ad revenues plummeting, newspapers closing, and many rural communities becoming ‘news deserts’ without access to local reporting.”

Klobuchar also said “to preserve strong, independent journalism, we have to make sure news organizations are able to negotiate on a level playing field with the online platforms that have come to dominate news distribution and digital advertising.”

MinnPost’s in-depth, independent news is free for all to access — no paywall or subscriptions. Will you help us keep it this way by supporting our nonprofit newsroom with a tax-deductible donation today?