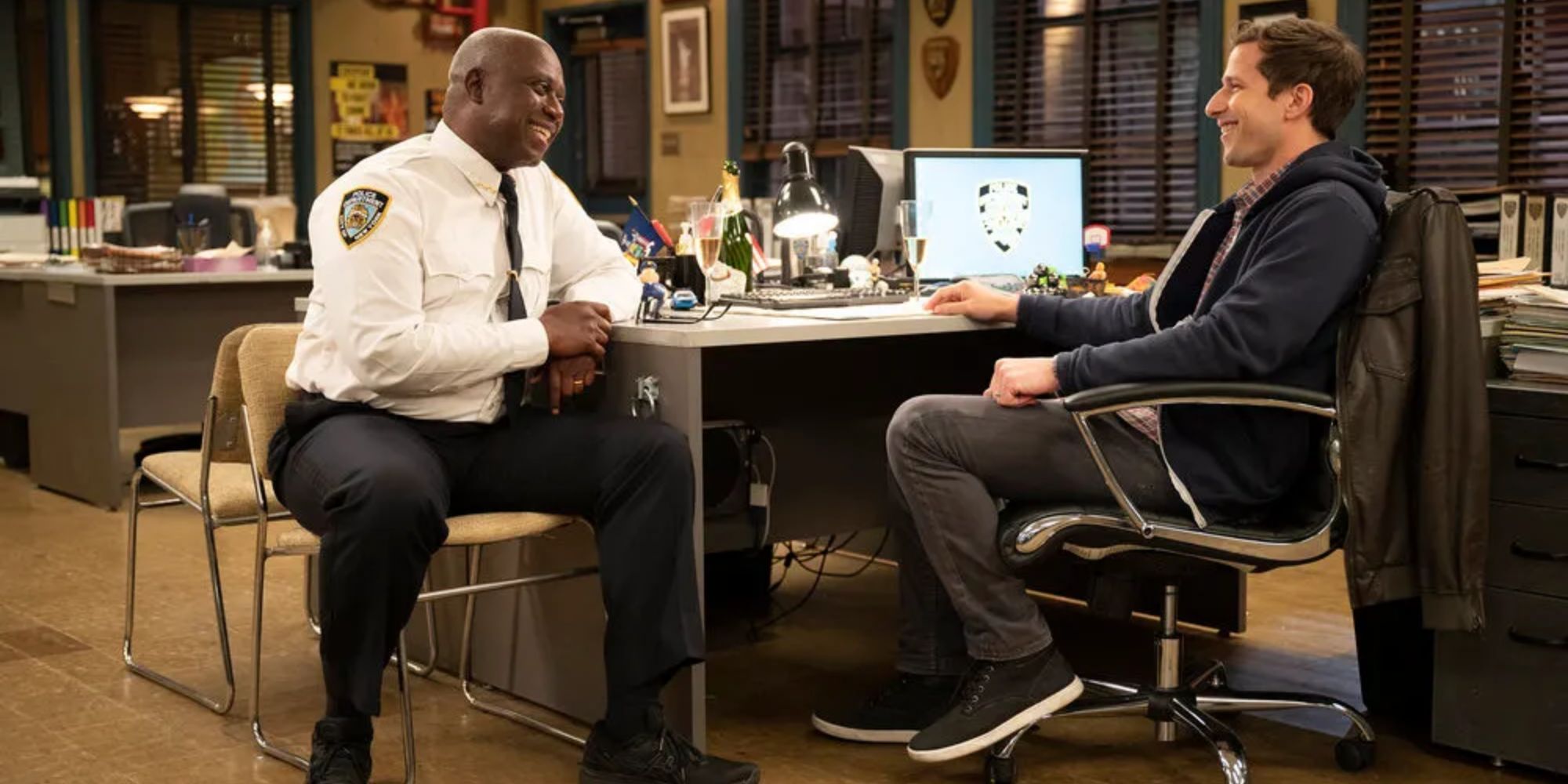 Brooklyn Nine-Nine is all things humorous and hard-hitting at the same time. We have seen Captain Raymond Holt (Andre Braugher) evolve from an emotionless robot to a dad figure for Detective Jake Peralta (Andy Samberg) who eventually becomes the son Holt didn’t have. Their childish rivalry culminates into an intimate familial relationship that can be deemed stronger than any blood relation.

At the beginning of the series, Jake had a lot of growing to do when it comes to his work ethic and his personal life. Holt was the biggest influence in shaping Jake as a detective and ultimately as a father. While Jake started seeing a dad in his new captain very early on, Holt also came into his role as a father figure to Jake in more ways than one.

When Holt Babysits Jake on A Case

It all starts with the new Captain wanting to stake out a case with the star detective for the sole purpose of observing him. In one of the initial cases pertaining to the Weiner Artist, assigned to Jake, we see Holt adamant about babysitting him as he wants to make sure the case is taken seriously.

This can be seen as a starting point of their relationship where the dynamic is set and later built upon.

A father always looks out for his kid in trouble. That’s exactly what Holt did when he benched Jake to digitize old files and pulled him out from fieldwork. Jake was knee-deep in a slump with no new leads and no case close to being solved. Albeit Holt had some fun while he was at it.

While doing the paperwork as assigned, Jake’s brain gets rebooted, and he has an epiphany regarding one of his open cases. In the end, Jake sees how Holt only wanted the best for him despite him making Jake rub a horse skin for good luck the entire day.

A tough situation calls for some tough advice to open our eyes. That’s exactly what Holt did for Jake on numerous occasions. Sometimes, a child like Jake needs someone like Holt to knock some sense into him. In matters of police work or relationships, Jake turned to Holt for some pearls of wisdom and Holt obediently provided plenty.

Jake makes the right decision by arresting a police chief’s son and takes a meaningful step in his relationship with Amy, all because of Holt’s amazing advice.

When Holt Punishes Jake by High-Fiving Everyone

Tired of his repeated tardiness, Holt crafts a special punishment that could torture and torment Jake. This showed how well Holt knew Jake and figured out the best way possible to get his supposed son back on track.

RELATED: 8 Times Jake Peralta Should Have Been Fired In ‘Brooklyn Nine-Nine’

He creates a special high-five with all the squad members except for Jake to punish him for coming late to morning meetings. And rightfully so, this angers and teaches Jake a valuable lesson – Don’t mess with Dad Holt!

When Holt and Jake Bond Over Mumps

One can only imagine the chaos that could happen when a poles-apart duo like Holt and Jake are forced to be in quarantine together. But we don’t have to imagine, because fans got to see the crazy pair solve a case while being unwell with mumps. We were introduced to Simon and Balthazar in this crazy episode along with a more real father-son side of their relationship.

They took care of each other and nursed each other back to health while spending some quality time with each other.

When They Arrest Bob and Go Against The FBI

When a trusted friend turns out to be evil and corrupt, Holt keeps faith in his work son who will soon get him out of trouble. Even with Bob pointing a gun at Holt’s head, he didn’t flinch because he knew Jake would solve the case and save him.

That’s the kind of belief every father should have in their children. And later when he sends Jake to retrieve the files, he tells him he believes him and even calls him ‘son’.

When Holt and Amy Save Jake From Gio Costa

As Jake and Boyle solve the case against Hitchcock and Scully, they get entangled with a mafia boss Gio Costa. Surrounded on all sides, they have nowhere to go. And as they lose all hope, his wife and his captain dad show up in the nick of time to save them from being killed.

This was peak dad behavior from Holt as he left everything to rush and save his ace detective from the mafia and his thugs as soon as he realized this ploy could be dangerous.

When Holt Opens Up to Jake

Dads are known to keep a brave face and struggle internally for the sake of their kids. But a modern dad like Holt is always straight with his thoughts and feelings. Many times we saw Holt open up to Jake, albeit in a joking manner, about his fears, his embarrassment, and his feelings.

Whether it was about Kevin and fights at home or his inhibitions about being the police commissioner, even if Holt didn’t express it straight away, Jake was able to detect something was wrong. Ultimately, this wholesome duo overcame all obstacles and pushed each other to do better.

When Holt Took a Risk to Save Jake From Prison

While not letting Amy take a favor from Seamus Murphy that could get Jake and Rosa out of prison, Holt takes it on his head and deals with the hardened criminal on his own to keep his squad safe. He puts everything on the line to get his detectives out of jail even when it puts him in jeopardy.

This was also the reason why Holt was fearful of being commissioner with this sword dangling on his neck.

When Holt Makes Jake See He Has a Family

Fans know what a messy and disgruntled childhood Jake had with his real father abandoning their family and with no siblings to turn to. When Jake was unwilling to go to a squad thanksgiving celebration, Holt made Jake realize he did have a family, the one he chose to be a part of.

This makes Jake realize what he’s been missing, and he shows up to celebrate the day with his chosen family.

NEXT: 5 Episodes of Brooklyn 99 That Addressed Systemic Injustice