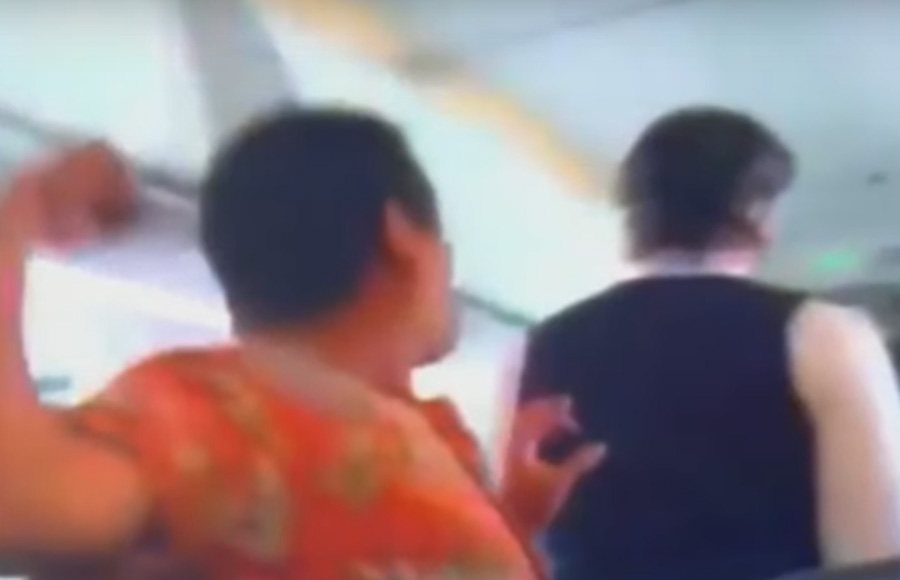 LOS ANGELES, CA – A unhinged California man has been permanently banned from ever riding on American Airlines ever again after he went berserk on a flight when told he would have to wait for a cup of coffee, jumping out of his seat and – as seen on to bystander cell phone video – rushing a flight attendant and sucker-punching him in the back of the head.

Alexander Tung Cuu Le of Westminster, California, 33, was subsequently subdued by passengers after the assault, and was placed under arrest when the plane, headed from Mexico, touched down in Los Angeles on Wednesday; he is currently charged with interference with flight crew members, according to the US Attorney’s Office for the Central District in California.

“A different flight attendant approached Le and requested that Le return to his assigned seat. Le did not comply and allegedly stood up and assumed a fighting stance towards the flight attendant by making closed fists with both of his hands,” they continued.

FREE DIGITAL SUBSCRIPTION: GET ONLY ‘FEATURED’ STORIES BY EMAIL

Big Tech is using a content filtering system for online censorship. Watch our short video about NewsGuard to learn how they control the narrative for the Lamestream Media and help keep you in the dark. NewsGuard works with Big-Tech to make it harder for you to find certain content they feel is ‘missing context’ or stories their editors deem “not in your best interest” – regardless of whether they are true and/or factually accurate. They also work with payment processors and ad-networks to cut off revenue streams to publications they rate poorly by their same bias standards. This should be criminal in America. You can bypass this third-world nonsense by signing up for featured stories by email and get the good stuff delivered right to your inbox.

The US Attorney’s Office noted that as the flight attendant started walking to the cockpit to report the incident to the captain, Le then ran up and punched him in the back of the head with a closed fist; upon landing, the assaulted crew member was taken to a local hospital for treatment.

Le was then restrained by passengers and crew, who tied the deranged man up with seatbelt extenders; according to a witness on the plane, Le reportedly claimed that “there are 10 killers on the plane” prior to the attack.

American Airlines issued a statement, noting that Le is now banned from flying with the company ever again, and that they will prosecute him to the fullest extent of the law.

“[Mr. Le] will never be allowed to travel with us in the future, and we will work closely with law enforcement in their investigation,” the statement said. “We thank our crew for their quick action and professionalism to ensure the safety of their fellow team members and customers on board. Our thoughts are with our injured flight attendant, and we are ensuring that they and their fellow crew members have the support they need at this time.”

In light of increased penalties against airline passengers following a massive uptick in assaults and unruly behavior against flight staff over the past year-and-a-half, Le will be facing a maximum of 20 years in a federal prison if convicted.